At Intramed Medical Centre Dr. Crouse provides No-Scalpel, No-Needle Vasectomy. He has been performing the No-Scalpel technique since 2002 and believes it to be a quick, effective and comfortable method.

No-scalpel vasectomies at our clinic provide a safe and virtually painless alternative to conventional vasectomy using a scalpel. Studies show that no-scalpel vasectomies have a complication rate eight times lower than conventional approaches and involve less discomfort – especially when coupled with no-needle freezing and optional nitrous oxide sedation, like we do at Intramed.

Intramed Medical Centre is a Canadian leader in the introduction of the no scalpel and no needle vasectomy procedure. Our surgical team has world-class training and support, and we are proud to operate at a high standard of care.

Please contact us for a consultation today if you are considering vasectomy. You are in good hands with Dr. Crouse and Intramed, where we perform 2000 vasectomies annually.

What is Different About a No-Scalpel Vasectomy?

No-scalpel vasectomy is different from a conventional vasectomy in the way the doctor gets to the tubes, not in the way he blocks them. In addition, an improved method of local anesthesia, the no-needle method, helps make the procedure virtually painless.

In a conventional vasectomy, after the scrotum has been numbed with a local anesthetic, the doctor makes two cuts in the skin and lifts out each tube in turn, cutting and blocking them. Then the doctor stitches the cuts closed. The third image below (far right) shows the incision and stitches with a conventional vasectomy procedure – different from our no-scalpel technique.

In a no-scalpel vasectomy the doctor locates the tubes under the skin and holds them in place with a small clamp. Instead of making two incisions, the doctor makes one tiny puncture with a special instrument. The same instrument is used to gently stretch the opening so the tubes can be reached. This line accurately represents the actual size of the puncture. (I) Through this tiny opening both tubes are temporarily lifted out and then blocked using heat cauterization.

The first image below (at left) shows how the vas tubes are accessed via the small opening. The centre image gives you an idea of the actual size of the cut that will be made during your no-scalpel vasectomy. The third image is just shown so you can compare the no-scalpel technique with the cuts made for a conventional vasectomy. 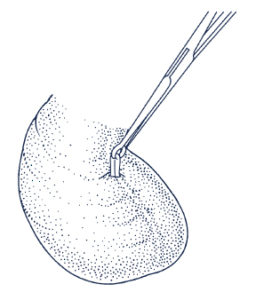 No-Scalpel Vasectomy: Exposing one of the two vas tubes 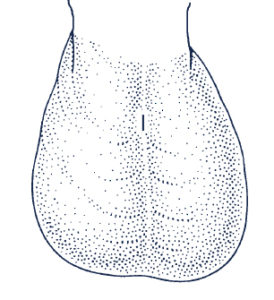 No-Scalpel Vasectomy: No stitches are needed to close the tiny opening 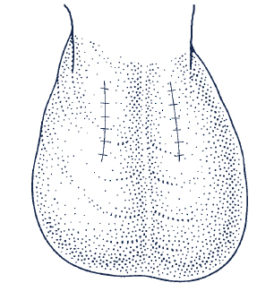 Dr. Crouse also carries out what many studies describe as a crucial step, called fascial interposition. This step involves tying the sheath or covering of the vas over one end of the cut tube with a dissolving thread, to create a natural barrier between the two cut ends. This is an additional ensurance that sperm will not be able to get into your semen after vasectomy. Not only is the vas tube blocked by heat cauterisation – it is also covered with a protective sheath.

The fine tubes are then gently placed back into the scrotum and the tiny opening heals within days and soon becomes invisible.

There is very little bleeding with the no-scalpel technique. No stitches are needed to close the tiny opening, which heals quickly, without a scar.

Our clinic also offers a different method of anaesthesia called “No-Needle Freezing”, which eliminates the need for a needle entering the scrotum. This is accomplished by using an air pressure device which is quicker, safer, and more comfortable for patients.

Standard anaesthetic injection with a syringe can be less comfortable, and offers a higher risk of hematoma from the needle. You can see why it may be preferable to push the anaesthetic through the pores in the scrotal skin with a burst of air.

We feel that it is preferable to do a vasectomy through a tiny central opening versus making larger cuts requiring sutures and a more complex recovery. No-scalpel vasectomy is fast and relatively painless. 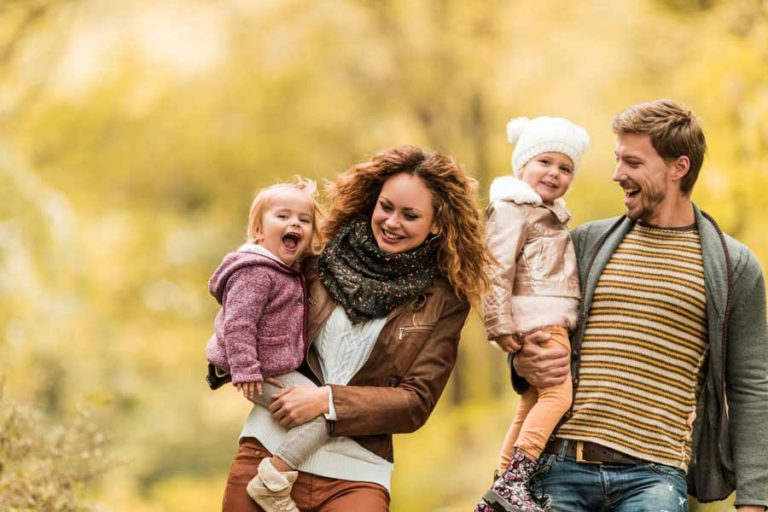 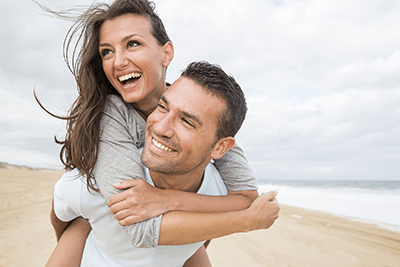 Sperm are made in a man’s testes. During sexual climax, the sperm travels through two tubes (the right vas and left vas) in the scrotum, mix with semen (from the prostate and seminal vesicles), and come out of the penis. In a vasectomy, these tubes are blocked so the sperm cannot reach the semen. As a result, you will ejaculate semen without sperm.

A man cannot make his partner pregnant without sperm.

Also keep in mind that the sperm makes up a minute portion of the ejaculate, approximately 1% of the volume. Therefore, you will not notice any change in the ejaculation post-vasectomy.

Your sexual experience, erections, performance, ejaculations are essentially unchanged. Only change is: No more sperm, no more pregnancy!

To understand what happens during a No-Scalpel Vasectomy procedure, please see this diagram of how the male anatomy functions. The testicles produce sperm that travel through a pair of tubes called the Vasa Deferens. You can easily feel them through the scrotal skin, like firm spaghetti-sized tubes on either side of the penis. These tubes carry sperm from the testicles out through the penis.

The NSV procedure simply interrupts the flow of sperm by cutting the sperm tubes and blocking their ends. Before making the decision to have your NSV, why not take a virtual run-through of the preparations, procedure, and recovery to see what you can expect from Dr. Crouse and your NSV from start to finish. Please contact us today.

Our doctor performs an “Open-Ended” vasectomy technique, where the vas tube from the bottom end is left open (uncauterized), while the end of the tube leading to the penis is cauterized.

As detailed above, fascial interposition is also performed to ensure the success of your vasectomy.

While studies are not conclusive, it is postulated that leaving one end open may permit sperm to leak out, resulting in less post-operative discomfort; this is because there is no sudden pressure back-up to the testicles.

The leakage does not increase risk of pregnancy, as the other end of the vas is sealed.

Sperm are simply reabsorbed back into the testicles in a natural process that causes no pain or pressure.

Studies also indicate that it reduces the time it takes for a vasectomy, and vasectomy reversal may also be easier to perform later, if desired.

We do not recommend getting a vasectomy if you think you may eventually want a reversal. You should consider vasectomy as a permanent contraceptive method.

At the Calgary Intramed Medical Centre our doctor is able to maintain our high success rates while also offering the potential benefits of an Open-Ended vasectomy.

Possible Risks and Complications with a Vasectomy Procedure 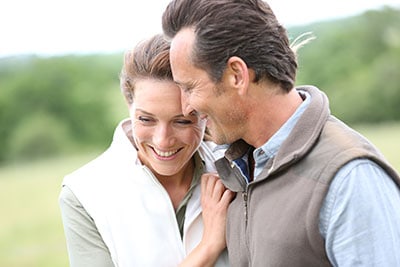 There are no life-threatening complications associated with NSV (No-Scalpel Vasectomies). The minor complications that can arise are generally short-lived and resolve with ice, rest, anti-inflammatories, and time. Long term safety with NSV is considered excellent, although all of the following are possible:

Does a Vasectomy Hurt?

With no needle anaesthesia and our no scalpel technique the pain is minimized. You will likely have some aching or other minor discomfort in the day or two after your surgery, but you can be sure that our gentle vasectomy procedure ensures a positive outcome with the least amount of pain.

It will only hurt a little bit – and not during the procedure.

Laser vasectomy is not a real medical procedure. We are not aware of any vasectomy doctors in Calgary, in Alberta, or anywhere, that offer laser vasectomy.

Sometimes no-scalpel no-needle vasectomy is confused with laser vasectomy. Some people may assume that because no needle and no scalpel are used a laser may be the tool applied to the operation – but this is not the case.

As detailed above our method involves the use of specialized instruments that obviate the need for scalpels and needles. The traditional scalpel is replaced with devices for puncturing a small hole and holding men’s vas tubes during the no-scalpel vasectomy procedure.

The needle is replaced with an air jet applicator which permits anaesthetic to be applied through the scrotal skin without a puncturing needle. We call this “no-needle freezing”. This device pushes the anesthetic into the skin of the scrotum through the existing natural pores in your skin.

Lasers are not used for vasectomy – but if a good laser vasectomy technique is developed Intramed vasectomy clinic will examine its potential benefits relative to our current methods. 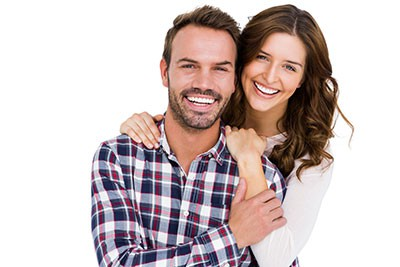